The Court Jester of the King

The Court Jester of the King

cSPACE Celebrates the Legacy of our First Superintendent

“Then and now, François has been a community champion, trusted watchdog of the building and a committed ambassador of cSPACE! I will personally miss his enthusiasm and animated interactions with everyone he encounters.”

If you were lucky enough to have an impromptu tour with François Ouellet, cSPACE King Edward’s former superintendent, you will know how his passion and joie de vivre electrified this old school. He knows a story about every inch of this building. François is a beloved member of the cSPACE community, and community is what he lives for. For those of you who have the pleasure of knowing him, and for those who did not, here is a little about François’ cSPACE story.

“François joined cSPACE 3 years ago, but started his work on King Edward School several years prior with the construction crew. Amidst the dust, plaster, and repair, Francois brought a sparkle to the construction site and caught my attention.”

For François the journey began 7 years ago, when he was part of the construction crew that worked on the restoration of King Edward. He says he learned a lot during this time, about how to work with different people, with different ideas, to come together on a single vision. There were project managers, designers, and Heritage specialists. He spent years with his hands on different aspects of the construction. He knew the building needed a lot of ongoing attention and care. He calls the old school, “a beautiful old lady who needs a lot of make-up.” François had to learn to work with all the old materials – the concrete, and mud, bricks, and plaster on the ceiling. And then he had to work with all the new materials and techniques – the drywall, the state of the art mechanical system, and everything that went into making King Edward a LEED Gold certified building. It was a long journey. One that saw him “hanging from a scaffold like Michelangelo” at one point.

The bricks themselves were a big job. He learned to clean them, to restore them. There is one corner in particular, by the Studio Theatre, where you can see the old bricks, and some exposed rod coming through the concrete. François spent hours on that one spot, refining it until finally his boss, Deeter, said, “François, that’s enough. That’s what I want.” It’s now part of his legacy.

When the construction was done, it was clear the building would need a superintendent. Someone who knew every inch of the place and could continue to take care of the old lady properly. François was a natural fit. He knew all the pieces of the puzzle, the electrical work, the heating and cooling, the louvres on the outside of the building that open and shut, rise and fall, automatically with the changes in wind and sun. Anyone looking after King Edward would have to know that “you always need to find a solution between the old and the new and turn on a dime.” François was the Jack of All Trades needed for the job.

“…when they saw the passion I invest[ed in]to this building I think it was the best way to be the Court Jester of the King.” [Edward]

After becoming superintendent, however, a brand new aspect of François’ job became apparent. He was the friendly face of King Edward to the tenants and visitors who worked in and enjoyed the building. He worked closely with the Farmers and Makers Market every Saturday throughout the year. He was proud of the magnificent landscaping he looked after in the summers, when the market was out front on the lawn. Inside, he was able to give visitors special tours with a unique perspective that only someone who had worked on the building could give. He was there to help out when people held events in the theatre – performances, weddings, and parties. He welcomed people to the Treehouse on the fourth floor when they came in for early morning meetings and team retreats. He helped the artists who came in to exhibit their works in the hallway galleries. He was a friend and helper to the artists who call King Edward home. He has touched and enhanced every aspect of this place.

Now it is time to enter a new phase. With COVID-19, François is returning to visit his home in Trois Rivières, Quebec. He is bringing with him memories of the Rocky Mountains, of the challenges he faced learning a second language, and the knowledge that his spirit is embedded as another narrative into the fabric of this old school. He is also bringing the contents of his Museum. There is a door to nowhere on the first floor of cSPACE King Edward. It opens to a space only a few inches deep. In it, François has created his own gallery. It contains tiny artworks, tokens that were given to him by some of the artists who passed through this space. It was a way to thank him for everything he brings to the job.

He’s also leaving something behind. In April at cSPACE, François curated his own exhibition. Calling it, “Parts of thing: Close encounters of the third kind,” it is a series of black and white geometric drawings he made over the past four months. He has invited all the tenants and staff in the building to pick one, to save as a remembrance. Will this be the last we see of François? We hope not. He is already planning a second exhibition. Bigger, more colourful, and we can’t wait. 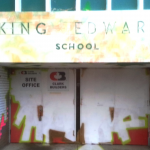 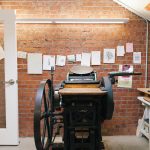