Get to know an artist! Today’s spotlight is on James Watson.

James is a violinist, performer, teacher, composer, whose Incubator project has been dubbed “The Kaleidoscope Project” by the cSPACE team. James’ project features Steve Reich’s Violin Phase, as well as a collaboration with a painter, in order to commemorate the active Geldingaldalir volcano which is currently erupting in Iceland. The kaleidoscopic element can be felt in the overlapping layers of perspective; the tumbling motion of the music overlapping and breaking up the painters’ impressions. James feels that the pandemic has taken up so much space in our imaginations, that we are missing out on some of the other spectacular events happening around us. There are live streams and drone footage of the volcano, and yet, many people are unaware of it. For James, this project “marks the passing of a beautiful moment and hopefully reminds people that other things happened this year.”

If that wasn’t kaleidoscopic enough, James likes to challenge himself in order to learn and grow as a musician. He is inspired by a pillar of Calgary’s musical community, interactive audio provider Donovan Seidle. Donovan is well known for his technical prowess in music production, as well as his incomparable musicianship (Assistant Concertmaster and performer with the CPO). James has designed his project in part so that he may research, learn and apply audio/video software and hardware skills in addition to challenging himself musically.

JW: My fictional autobiography might be called “A brief and unexpected history of tents” because of the time I tented for a month in Iceland without actually setting out to do so.

cSPACE: Ok stop. We legit want to read that book. And because it happened to you, doesn’t that make it an actual autobiography? We have so many questions, but for now, we must move on. What excites you about the Creative Incubator?

JW: I am excited for the chance to be recognized and enabled as a creator in a meaningful way, my participation in previous projects has always been as an enthusiastic collaborator but this is an exciting next step with great potential for my future as a musician.

cSPACE: What inspires you about cSPACE?

JW: My experience at the cSpace has been only positive, initiated by the cSpace team and their confidence in my project and by the seeming phrase of the day “yeah, I think we can make that happen.”

cSPACE: At cSPACE we live by the 4C’s: Creativity, Community, Collaboration, and Change. Which of these resonates the most with you right now?

JW: [Creativity] resonates the most at this moment. When I was warming up/improvising in the theatre space last week I found some cool sounds that worked really well in the hall. This morning I woke up at and realized that it would work well in a piece so I wrote a piece for solo violin in that space.

cSPACE: Where do you see yourself in five years?

We would not be surprised to see James playing at Reykjavik’s premiere concert hall in five years. Or playing by one of its active volcanoes next to a tent. If you, like us, want to ask James more questions about his year of unintended tenting, or hear his music, or follow what he’s up to, you can keep up with him on Facebook mostly. However he has also started an Instagram account recently, so please follow him! 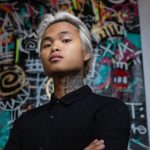