Caitlind R.C. Brown, Wayne Garrett and Lane Shordee are the talented trio behind two public art sites at cSPACE King Edward: Yesterday, Today, Tomorrow for the Grand Historic Entranceway and After Image for the ArtPark.

Caitlind r.c. Brown & Wayne Garrett work with diverse mediums and materials, ranging from artificial light to re-appropriated architectural debris. Their projects explore the social effects of light, interactivity, site-specificity, collaboration, and play. Regular collaborators since 2010, Caitlind and Wayne have exhibited work in Canada, Russia, the United States, the Czech Republic, the Netherlands, Singapore, Israel, and South Korea. Best known for their CLOUD sculptures constructed from thousands of incandescent light bulbs, the artists recently expanded their Celestial Series to include sun and moon sculptures (SOLAR FLARE, NEW MOON). Simple, bright, and playful, this body of work draws from the universal language of environmental imagery – despite language barriers, cultural differences, and geographic distance, celestial phenomena are understood by people all around the world. Simultaneous to this clean and alluring body of work, they nurse a growing interest in pre-demolition spaces and alternative arts contexts.

Lane Shordee is a scavenger artist based in Calgary, Alberta. Drawing from construction waste and items found by happenstance, he builds sculptures and installations that both challenge and indulge our relationships with the things we throw away.  Lane mines the immediate surplus of materials available, and, informed by his environment, reframes it into cohesive structures, allowing its presumed worth to be re-evaluated (credit, artists website). Some of Lane’s most notable works include THE GREENHOUSE (Kensington, Calgary – Wreck City: An Epilogue for 809) and WATERWAYS (Wreck City: Phantom Wing).

We wanted to get to know the talented trio a little better so we caught up with them for a Q&A about their work, their inspirations and what they think cSPACE King Edward will mean for the Calgary community. Read on.

Q: When people ask you what you “do”, how do you answer?

CAITLIND: I’m an artist, but that means that what I’m “doing” is constantly changing. Sometimes I’m a sculptor. Sometimes I’m a curator, or a photographer, or a designer, or an idealist, or a writer, or a volunteer, or a publicist, or just very, very tired. But being an artist is the simplest description for a much more complicated career path, cobbled together from a variety of “doings” that evolve in relation to the context that’s unfolding.

Q: Besides your art practice, are you involved in any other kind of work?

WAYNE: Beyond my art practice I am also an active musician in the Calgary music scene. I feel like musical improvisation really helps with the creative thought process. The act of constantly looking for different ways of navigating a series of chord changes, or expressing a musical emotion, is a catalyst for creative thought outside of music, encouraging alternative directions and possibilities.

Q: What mediums do you work with? How would you describe your subject matter? What themes seem to occur/reoccur in your work?

LANE: Since the context of my work is always shifting, the materials must shift with it. In that case, I would not say that I do not have any specific material that I would gravitate to. However, I would say that found and reclaimed byproducts of urban culture are attractive because they are not so reliant on economic position. That means that my artistic practice is not reliant on my income. This leads me to the next question, about the subject matter of my work. I would say that although I am continually working with shape and form, the subject matter often leans toward ideas of sustainability and what that means as a culture, but also what it means to be a sustainable artist.

Q: What are you currently reading, listening to or looking at to fuel your work?

CAITLIND: Podcasts were invented for people like us, who spend lots of time at home thinking, making, and editing. Right now, I’ve been listening to all the post-election coverage on This American Life, Radiolab, The Moth, and Freakonomics. I’m slowly reading through To the Lighthouse by Virginia Woolf, and an equally poetic novel called Acquainted with the Night by Christopher Dewdney. I’m very much looking forward to watching as many documentaries as possible at this weekend’s CUFF.Docs – always a fiery festival, always evocative and motivating.

Q: What are your biggest challenges to creating art and how do you deal with them? How do you navigate the art world?

WAYNE: Perhaps because I tend to focus more on the pragmatic and mechanical challenges, I would say the hardest challenge is landing on a solid concept for a given space. It’s such an important step because it really is the essence of the project. Once the concept is set, the other problems are more straight ahead, and there are typically answers out there for them. This is especially true in situations where there is little to no context or criteria for a given opportunity. ‘Make anything’ can be the most crippling challenge for the mind. There’s this unspoken self-imposed pressure that without criteria or limitations the work has the infinite potential. That is terrifying at times. On the other hand, when given a more strict set of guidelines or criteria, there is so much more to respond to and push against, something you can cleverly work around.

Q: What would you say was biggest achievement or milestone to date?

LANE: As for milestones, I feel like each project I do is a milestone from the next, so with that logic my most recent project would be my biggest achievement. This is not the case since each project has its own particular achievement. I would say that getting to work as a full-time artist for the last 5 years and getting to collaborate with so many amazing artists over the years would be my greatest achievement to date.

Q: Pretend you’re pitching your cSPACE King Edward public art proposal in an ‘elevator pitch’: How would you describe the concept in just a few sentences?

CAITLIND: We, over-optimistically perhaps, applied to two separate sites for cSPACE King Edward’s Public Art Call, both on the historic side of the building. Our first proposal is for a piece called Yesterday, Today, Tomorrow, designed for the Historic Grand Entrance of the school. Taking the form of 105 suspended hourglasses, the piece is a delicate, kinetic installation illustrating the movement of time – both literally, and relationally. The sand inside the hourglasses will be ground from discarded sandstone, harvested from the building itself.

Our second proposal is called After Image and is intended for Site 3 (outside the historic front entrance). The sculpture draws from wireframes, blueprints, and ideas of “ghost architecture” to create a simplified replication of the King Edward School’s grand entrance archway, further down the lawn. We think of it as a moment, frozen in time – built to linger in perpetuity as the building itself grows and changes. It itself will change too – over the years, vines and creepers will grow up the sculpture, slowly sheathing it.

Q: What inspired you to submit a proposal? Where did you draw your conceptual inspiration from?

WAYNE: We were drawn to this opportunity for a number of reasons. cSPACE has been an exciting project to follow and as artists in Calgary, it’s a relevant step for the city. All of us participated in Phantom Wing in varying capacities, so the familiarity with the building as well as the approach towards the arts community was enticing. Our proposal draws from the relationship between the beautiful historical sandstone building and its new direction and modern glass addition. The passage of time, as well as the transformation of materials, is evident in this space. The sandstone itself can be broken down into the sand, and even melted into glass.

Q: What does having a physical space to make art in mean for your process, and how do you make your space work for you?

LANE: Physical spaces, whether they are blank and neutral like a gallery or oozing historical significance like the King Edward school, provide a tangible starting point to work from. The physical starting point becomes a conversation between how I might interpret the space, and what exists in front of me that I can’t escape and therefore must contend with. This requires a certain amount of work that might come in the form of research but can often come from spending time in the space, getting to know it on a personal level. Rather than have a place to show my thoughts, I prefer to work with how my thoughts might respond to an already rich complex environment.

Q: What advice has influenced you?

“Sometimes you have to sneak the meaning in through the back door.” – Eric Moschopedis, Artist

Q: What do you think cSPACE King Edward will mean for the Calgary community?

WAYNE: I think it will be a great incubator space for arts and culture in Calgary. The design of the spaces and facilities is very considered and will provide a great opportunity for connections between a diverse group of communities. Having arts organizations in the same space as artist studios and performance groups is a really exciting situation. The variety of tenants combined with the common spaces, exhibition spaces, and performance venues makes this a unique and progressive step for Calgary. Hopefully, it can inspire more cross-pollination between communities and even serve as a model for future projects.

Q: Do you have Instagram? If so, what’s your handle?

LANE: I will preface this answer by saying that I do not work on the internet. I did, however, grow up during the computer age and saw it grow from a novel invention into a virtual reality used to express and create. But while the people around me immersed themselves into that world, I wanted to know what my physical self could achieve and fail at. My artistic practice, at this moment, relies much on the physical world, with all its foibles and struggles. To finally answer your question, I do have an Instagram account that I set up a couple months ago so that I could start building an alphabet from A to Z, and when finished I will have my own font that I can use. It was a way of transforming a social device into an artwork that grows. Follow Lane on Instagram at @laneshordee.

You can also learn more about Lane and his work on his website and keep up with Caitlind R.C. Brown and Wayne Garrett on their website. 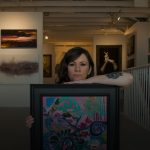 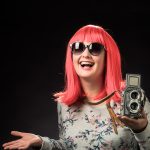