Meet Theatre Encounter, who have been with us since the beginning as one of the first cSPACE King Edward tenants to join us on the journey towards creating our art incubator and creativity hub. Theatre Encounter’s strong vision for space on the “boiler” (or ground level) floor as a collaborative black box theatre (complete with sprung dance floor, mats, and lighting) made them a clear choice as a tenant.  The rehearsal space will be used for their time-intensive performance experiments, rehearsals, and workshops while giving other tenants and the public the opportunity to observe works in progress. With Calgary’s deficit of serviceable rehearsal spaces, they welcome the opportunity to share this unique studio space with other artistic groups.

As an experimental theatre company, Theatre Encounter’s mandate is to create expressive alternative productions of theatre’s classic works with a focus on physical explorations and textual interpretations and push the cutting edge of artistic and social boundaries. By reinventing classic texts through a modern Canadian perspective, with a strong emphasis on provocative language and embodying movement, Theatre Encounter offers Calgarians an alternative to the mainstream view of classic dramatic literature.

We wanted to share a wide-ranging conversation we had in late 2015 with Michael Fenton and Mike Unrau, co-artistic directors and founders of Theatre Encounter: Calgary’s highly experimental physical theatre company. This unique company creates alternative productions of classic theatre works, often with “a strong emphasis on provocative language and embodying movement”.

cSPACE: Tell me a little bit about the creation and history of Theatre Encounter. What makes TE different from other theatre in Calgary?  What are your company influences and inspirations, local or afar?

TE: Theatre Encounter was devised after Mike Unrau and Michael Fenton met as MFA graduate students in theatre at the University of Calgary.  We realized that Calgary was missing a theatre company that did classic dramatic works through modern interpretations.  Of course, other companies cover aspects of this, but we wanted a fresh perspective of the topic dedicated to it.  Our emphasis is to render these works through a decidedly contemporary lens via strong stylistic choices to encounter the audience with something unexpected and new.

c: What are some of your favorite past productions and what made them stand out?

TE: One of our favourite past productions is Everyman, an anonymous 15th century morality play, due to the production’s extreme experimentation in physical interpretations of text (there were only 8 lines of spoken text in the production, all other text was transformed into emotive physicality from raw internal narratives).  Lighting was reduced to sensor activation by performers, which was at low levels that included both stage and audience equally. We wanted to include the audience so they could experience visually everything the actors encoded.  The nature of the text is on death, and thus, the physical performance inquired into extreme physical experiences.

Also, Samuel Beckett’s 1953 theatre of the absurd play, Waiting for Godot, for the expressionistic experiments in emotive displays of action.  The emblematic ‘tree’ in Godot was transformed into a 25-foot 30-ringed hemp noose, which played the contrast of death to the vibrant desperation against time.

c: What are your plans for cSPACE King Edward – tell me more about the vision for the black box theatre, programming, and need for rehearsal space?

TE: The aim for our cSPACE studio (named “The Abattoir”) is to create a working artistic environment of experimental and cutting edge theatrical theory merged with practice.  It will be a collaboratorium to jam with other disciplines of creative expertise into uncharted new artistic form.  Theatre Encounter’s vision is to create a world-class experimental space and artistic and social research environment by reinventing the traditional into the contemporary, in order to push the cutting edge of artistic and social boundaries.  The studio will be a practical space where artists from different mediums can sweat freely as they repeat again and again their quest for the essence of artistic form.

c: If our readers have never had the pleasure of attending a TE production, could you describe what they could expect?

TE: At a Theatre Encounter production, an audience member can expect to find three things:  sweat, suffering, and love.  You will probably believe the volume is too loud and yet also too quiet; you’ll find it too bright and then also too dark. We create a mixed space of contradictory structure to explore the range of diverse human experience.  We do not make productions to be liked.  We make productions to challenge the actors and audiences norm, to push people’s preconceived notions to the edge of understanding, and to disarm expectations to allow for a visceral experience beyond intellectualization.  We hold all this to the highest quality of excellence.  As one audience member said:  “A year ago I saw your production of Everyman and had one of the most intense and visceral reactions to an experience in a theatre that I have ever had.  I was angry, excited, I thought I was frustrated at the work… I wrote a long letter to you in the lobby …   I realized the other day that that production was one of the best things I have ever seen.”

c: What’s next for Theatre Encounter?

TE: We’re working on an upcoming production of Samuel Beckett’s Endgame (expected to be staged in the Spring of 2016).  All productions from 2013 onwards have been different experiments in research objectives towards our 10 year artistic goal:  to mount a multi-varied and perhaps multi-day production of August Strindberg’s A Dream Play through the artistic composition of textual exploration and physical inquiry.

c: You are both well travelled, and have worked around the world.  Why Calgary and what makes this the city that you want to work in?

Calgary, at the heart of the New West and the westernization of our cultural paradigm, is the perfect place for experimentation and reconstruction of the artistic form.  We’ve had audience members say “We expect to see this type of work in New York, but are glad to have it here.” We’re deeply interested in the contrast between world-based research and the local experience. We are happy to be part of this new wave of theatrical innovation, and excited to be a part of the pulse that the King Edward will give to Calgary’s artistic scene.

*Since our interview, Mike Unrau, Co-Artistic and Founding Director has left Theatre Encounter in pursuit of other opportunities, but the company is pleased to announce and welcome Val Duncan to the Company!

We’re excited to see what the future of Theatre Encounter holds, the collaborations that spin out of their custom space at the King Edward.  To connect with Theatre Encounter, or check out past and current projects find them at www.theatreencounter.com 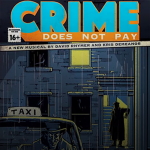