You’re standing on a wide laneway between The Residences of King Edward, and the Art Park at cSPACE. A low wall runs the length of the laneway on the west side, separating cSPACE from its neighbours. Periodically along the wall, a dark marble slab with writing etched into the stone will catch your attention.

> This is the Poet’s Walk. Inspired by the Woonerf of Holland (“living streets”), the tree-lined Poet’s Walk is a pedestrian space on our west side. Woonerf is a term for a boulevard that prioritizes pedestrian and bicycle traffic, or people over vehicles.

The walk can morph into a market place, busker haven or canvas for chalk art. ideal for community events of all colours. It’s powered, networked and artified. During Saturdays in the summer you can find the Farmers and Makers Market vendors on the south lawn and up and down the Poet’s Walk, making it a perfect place to wander and daydream on a summer’s day.

This public artwork at cSPACE King Edward is the result of a partnership with our neighbours at Rockwood Custom Homes, and features three poetic art installations. The three works acknowledge the importance of the land, the legacy of the former King Edward School, and the creative transformation of the site into an inspired place to support communities of artists, nonprofits and entrepreneurs working in the culture and creative sector.

Along the Poet’s Walk You’ll Find

Dr. Leroy Little Bear
Every society, in one way or another, lays claim to a territory. Within that claimed territory, a culture arises from the mutual relationship with the land. It is through this mutual relationship with the land, that cultural icons, symbols and images, values, customs, ceremonies, stories, songs and beliefs of the people are developed. These, in turn, are embodied into the very being of the people.

Clara Anne Johnson
The school, every school, is a continuous tradition. It is a personal, life-receiving, life-giving. More than any other work-place, this institution is built with the spirits, lives and minds of all who come together here. There is really no past, no present; there is only the milieu in which we all grow. When we leave, we take with us the part of the school that we personally have become, we leave something of ourselves.

tag the streetcar and dance within, echo echoing ring around the rosie children
child’s hand in mother’s hand, a gallon of drywall mud in builder’s calloused clutch
a pioneering stride inside the Incubator of Imagination where prairie, plow and pencil collide
paint from the Bloods’ riverbank store primes set for Inaugural performance
dancers trace frenetic tread of muddled children’s boots on linoleum, test acoustics of cubicles
reintroduce the vapours of lost sounds to long halls lonely for a youngster’s version of rhythm
coffee craving creators test the safe symmetry of nervous neighbours
as a power chord from a Fender Deville rattles chalkboard sill
preserve proto-primitive, hardly a breath since ancient charms, machines requiring engagement of the entire arm, were wonders of the day; re-employed looms and silk screens now bathed in the glowing logo of a once-bitten fruit, paint from the peigan’s sacred riverbank powder stores, timeless as a pocket watch, patience, labour- enticing the unplugged forward thinker, the backtracking innovator.

child’s unfettered soul, skin untouched by heartbreak and alcohol
paints a bird’s eye view of a brown beige smudge on the rise like a castle
moat of monkey bars soccer pitches, honeycomb house rows to mountain, river, field
ambition to reflection, married to play, outside easy confines, awaiting ‘dinner!’
they harmonize, scrawl and spin with the abandon, fury and wonder of the young heart
reharness, recapture, reveal art 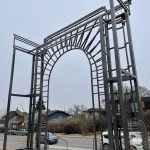 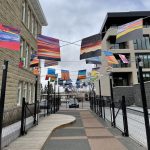